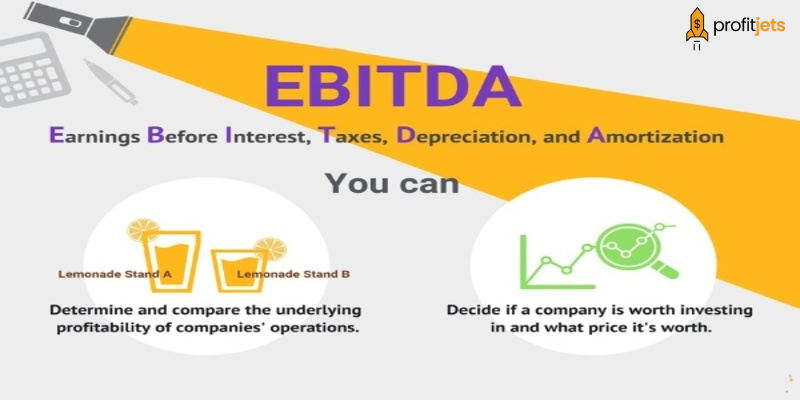 Earnings Before Interest, Taxes, Depreciation, and Amortization, or EBITDA, is a statistic used to gauge an organization’s operational success. However, it might be viewed as a hazy representation of the total cash flow generated by the company’s operations.

EBITDA frequently significantly impacts determining how financially successful a company is. Although it can’t be used as a decisive criterion to gauge a company’s total profitability, it is a reliable measure of how well a business is performing.

The EBITDA calculation modifies operating income (EBIT) to exclude specific non-cash items. These deductions are meant to take control of business owners over debt financing, capital structure, depreciation techniques, and taxes away (to some extent). It can be used to demonstrate a company’s financial performance without considering the capital structure.

Now, let’s look at what EBITDA is, in brief, to know it better.

EBITDA: What is it?

A financial statistic is EBITDA, or earnings before interest, taxes, depreciation, and amortization. It is widely used by businesses to calculate the financial performance of their operations, and it is frequently employed in place of net income.

Additionally, it gives lenders and investors a clear sense of a company’s profitability. However, EBITDA is frequently regarded as inaccurate because it does not account for the company’s cash flow.

Now, let’s have a look at the method through which we can calculate EBITDA.

The formula for computing EBITDA is as follows:

The following details each part of the formula:

Since a company’s financing structure influences interest costs, they are not included in EBITDA. Interest costs are incurred when a corporation borrows money to finance its operations.

Due to the varied capital structures of different businesses, interest costs also vary. Therefore, adding back interest and ignoring the effect of capital structure on the business makes comparing the relative performance of organizations easier. In addition, keep in mind that interest payments are tax-deductible, allowing firms to benefit from what is known as a corporate tax shield.

Taxes differ and are based on the area where the firm is located. Since they are a result of a country’s tax laws, which are not particularly relevant to evaluating the effectiveness of a management team, many financial analysts prefer to include them when comparing organizations.

Depreciation and Amortization (D&A) is based on prior investments made by the company rather than on how well the company is currently performing. Businesses invest in long-term fixed assets (like structures or vehicles) whose value depreciates over time.

A percentage of the company’s tangible fixed assets may deteriorate over time, which is the basis for the depreciation charge. If the asset is intangible, an amortization charge is incurred. Because patents have a finite useful life (competitive protection) before expiring, intangible assets like them are amortized.

Assumptions about the depreciation method, salvage value, and valuable economic life significantly impact D&A. As a result, operating income may differ from what analysts expect it to be, so D&A may be excluded from the EBITDA calculation.

The cash from operating activities area of the firm’s cash flow statement is where the D&A expense may be found. Since depreciation and amortization is a non-cash item, it is added back to the cash flow statement (the expense is typically a positive number for this reason).

EBITDA: Why Use It?

EBITDA is frequently used as a slack substitute for cash flow. By multiplying it by a valuation multiple derived from equity research reports, publicly listed peers, and industrial transactions, it can provide an analyst with a rapid estimate of the company’s value and valuation range.

Investors can also use EBITDA to assess a firm when it is not turning a net profit. Private equity firms widely use this statistic since it is excellent for comparing similar businesses in the same sector. Likewise, business owners use it to assess how well they perform compared to their rivals.

Neither GAAP nor IFRS recognizes EBITDA. It presents the corporation as having never paid any interest or taxes. It depicts assets as never losing their inherent worth over time, which makes some wary of utilizing them (no depreciation or capital expenditures are deducted).

For instance, a manufacturing business that is expanding quickly can show year-over-year increases in revenue and EBITDA. It bought numerous fixed assets throughout time to increase, and each one was financed with debt. Investors should consider other measures, such as capital expenditures, cash flow, and net income, in addition to top-line growth, even though the company may have excellent top-line growth.

Investors can use the Enterprise Value/EBITDA ratio to compare two companies and determine if one is overvalued (high ratio) or undervalued (low ratio). Comparing similar businesses (share the same industry, operations, clientele, margins, the pace of growth, etc.) is crucial because typical ratios across different industries might range significantly (high ratios for high-growth industries, low ratios for low-growth industries).

The statistic, calculated by dividing a company’s enterprise value by EBITDA, is frequently used in corporate valuation.

Financial modeling commonly uses EBITDA as a starting point to determine unlevered free cash flow. Even though a discounted cash flow (DCF) model solely evaluates the business based on its free cash flow, earnings before interest, taxes, depreciation, and amortization (EBITDA) is such a frequently used statistic in finance that it’s advantageous to use it as a reference point.

EBITDA was the main focus of this entire blog. However, Profit Jets should be considered if you also want services related to your stock.

When we talk about Profit Jets, they provide professional bookkeeping, tax, accounting, and advising services to assist your company in adhering to rules and achieving its objectives. So what are you still holding out for? Make a quick call to Profit Jets.

Make an Inquiry
Powered by